Making A Difference: Syrian Youth in the Za’atari Refugee Camp 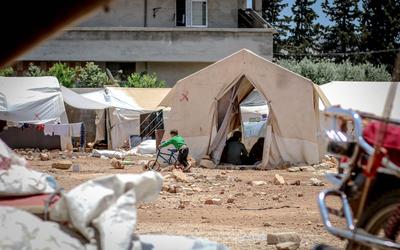 In a blog published by Toby Fricker for UNICEF, Fricker describes Hanadi’s life in the Za’atari refugee camp in the past decade. Fricker first met Hanadi in 2013, eight months after the refugee camp was opened in Jordan due to the huge number of Syrian refugees fleeing the civil war. At the time, Hanadi was 17 years old and was attending a UNICEF-supported vocational training center in the Za’atari camp. Hanadi had arrived at the camp only three months earlier, after her family had fled with whatever items they could carry with them from their home near Damascus. She told Fricker that she was very glad to have been able to keep up with her education amidst all the chaos (Fricker, 2022).

“I think I am making a difference. I’m really helping,” Hanadi told Fricker. She was reflecting on her work over the past decade in the camp in Jordan. She now teaches computer skills to a class of Syrian children refugees aged 11 to 16. The students seem excited and engaged by Hanadi’s teaching, as she goes through some basic computer skills that are helpful to learn. “I teach them enough to get a start,” she says.

It is informatively inspiring how Hanadi was able to go from a student in the camp to a teacher. Like many of her classmates, she had to experience things that an average child is not expected to. She had to flee a civil war with her family and start a whole new life in a country she was unfamiliar with. However, in the face of all these challenges, she was able to persevere and live a fruitful life that is dedicated to teaching young children in the camp (Fricker, 2022).

Many youth who leave high school in the camp fail to find meaningful opportunities and struggle with making a major impact in their community. Hanadi was able to complete her education and earn a degree at a university, furthering her education and opening up many opportunities. Today, she is married to Tariq, who is helping raise their two joyful children and is continuing to encourage youth refugees in the area to pursue their dreams and further their dreams (Fricker, 2022).

However, fleeing a civil war and the chaos that comes with a decade of life in a refugee camp with 80,000 people is bound to be a struggle. “My hope is to get back [home],” Hanadi told Fricker back in 2013 amid a shaky voice with tears in her eyes. To this day, Hanadi has not been able to go back home, and her children are yet to have ever lived in a house or visited a family home (2022).

Years later, the camp looks just as it did when it first sprung up to house thousands of fleeing refugees. With that being said, a few innovations have helped improve the quality of life in the camp. For one, instead of having to carry large jugs of water around and wait in long queues, refugees are now able to use an innovative, environmentally- friendly water and sanitation system. This is a much better way of getting water, as the water trucks used to struggle to navigate the constant desert storms and narrow paths (Fricker, 2022).

The services that are offered to the youth, such as learning and vocational training and sports, are largely independent as they are managed by Syrians themselves. The sustainable, community-based approach has been integral as the funding has decreased over the past years (Fricker, 2022).

(Read more about the importance of community-based projects here!)

“We’re dealing with young people who have grown up amidst the trauma of war and are now transitioning to adulthood at a very uncertain time when opportunities can seem limited,” says Tanya Chapuisat ,UNICEF'S representative in Jordan.

Initiatives looking into hybrid, modern ways to distribute educational material should be explored, since they will have positive effects for community development. This will also speed up the region’s recovery after the civil war and ease the transition into a new generation of leaders and rebuilders. World Forgotten Children Foundation’s mission has always been concerned with the wellbeing of children around the world. You can also make a difference, and aid vulnerable children who desperately need help.