According to the World Health Organization, the estimated incidence of Down syndrome is between 1 in 1,000 to 1 in 1,100 live births worldwide (Source: Healthline). 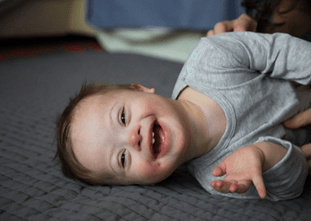 Several countries across the globe are seeing a decline and even completely eradicating the number of babies born with Down syndrome. Before diving into the prevalence of Down syndrome from country to country and what has led to a heated debate, let’s talk about what Down syndrome is and the public’s perception and misconceptions about it.

What is Down Syndrome?

Down syndrome is a type of intellectual disability caused by extra genetic material in chromosome 21. This can be due to a process called nondisjunction, in which genetic materials fail to separate during a crucial part of the formation of gametes, resulting in an extra chromosome (called trisomy 21). Some physical characteristics of Down syndrome in infants are decreased muscle tone, a flat face, eyes slanting up, irregular shaped ears, ability to extend joints beyond the usual, large space between the big toe and its neighboring toe, large tongue relative to the mouth, etc. (Source: World Health Organization).

Children with Down syndrome are at a higher risk to be afflicted with conditions such as hearing loss, obstructive sleep apnea, ear infections, eye disease, heart defects, intestinal blockages, hip dislocation, thyroid disease, anemia, leukemia, Hirschsprung disease, among others.

Unfortunately, so often when people are told that they are having or have given birth to a child with Down syndrome, words such as “I’m so sorry” are the first thing they hear. But why is this, and how can we go from being an apologetic community to a celebratory community, embracing these exceptional human beings? The Canadian Down Syndrome Society created an entire campaign centered around taking “sorry” out of one’s vocabulary in their #AnythingButSorry campaign recommending replacing the word “sorry” with words such as “congratulations” instead when addressing parents of infants and children with Down syndrome (Source: Today's Parent).

Cheryl Bilsborrow is one such mother who has mentioned that after having a blood test done to determine whether or not the baby she was carrying had Down syndrome, she received a call that started with “Really sorry. Bad news”, which she says spoke volumes about the perception of children with Down syndrome. To most, they were a curse, a problem — the opposite of what any parent would want. The discussions she endured following the test focused on "options" which seemed to be mostly angled at termination and not so much at counseling and resources about raising a child with Down syndrome. She described the situation as if they were making it out to be the worst news in the world. Today, she describes her two-year old son Hector as the most wonderful baby who has, “beautiful white hair and blue eyes, and he is always smiling and laughing, blowing kisses and coming for hugs” (Source: The Sun). Cheryl Bilsborrow isn’t alone and this story has become all too familiar to others all over the world.

Fact vs. Fiction – Combatting Myths About Down Syndrome

Developed vs. Lesser Developed Nations - The Prevalence of Down Syndrome

In England all pregnant women are offered a screening test for Down syndrome between 10 and 14 weeks of pregnancy. If a screening test shows that there is a higher chance of having a baby with Down syndrome, the patient will be offered diagnostic tests to find out for certain if their baby has the condition (Source: NHS Services). There has been much criticism for these tests arguing that instead of being utilized for informative purposes, that many women are being told that the test’s purpose is to determine whether to terminate the pregnancy.

In addition to the UK, there have been higher instances of abortions linked to fetuses testing positive for Down syndrome traits in the United States, as well as in Iceland where Down syndrome has nearly been eradicated. In Iceland, since prenatal screening tests were introduced in the early 2000s, the vast majority of women -- close to 100 percent -- who received a positive test for Down syndrome terminated their pregnancy (Source: CBSN).

People with Down syndrome, their families and advocacy groups (such as the Society for the Protection of Unborn Children) have expressed concern after revised figures revealed that the number of abortions for Down syndrome in England and Wales have increased by 50% over the last ten years (Source: Daily Mail). The onset of the rise in abortions in developed nations seems to be largely due to misconceptions about the condition.

In lesser developed nations, the conversation surrounding Down syndrome is less focused on pregnancy termination as prenatal screenings are less accessible. Instead, they focus on the high rates of abandonment of infants and children with Downs syndrome and other disabilities.

Children with disabilities in developing countries have a higher mortality rate due to lack of basic healthcare. Also, children with any disability tend to be the most stigmatized population in many countries, as some countries will shun them completely. There is also limited access to scholarly research and/or public literature on care (Source: The Borgen Project). Due to all of these reasons the rate of abandonment is very high as families lack the resources to care for the children and/or are concerned that they will be stigmatized for having a child with a disability.

Regardless of the country, there is a clear lack of understanding and acceptance of Down syndrome globally. In an effort to combat the misconceptions and stigma, World Down Syndrome Day takes place annually on March 21st with the aim to advocate for the rights, inclusion, and well-being of people with Down syndrome worldwide.

For nearly two decades, the World Forgotten Children Foundation (WFCF) has been supporting children with Down syndrome and other disabilities. On March 21st and every day in between, WFCF will continue to rally behind these individuals and their communities.

Learn how you can support WFCF’s mission and vision here.

Healthline. (n.d.). Down Syndrome: Facts, Statistics, and You. Retrieved February 10, 2020, from https://www.healthline.com/health/down-syndrome/down-syndrome-facts#1

Today’s Parent. (2019, November 29). How to welcome a baby with Down syndrome. Retrieved February 10, 2020, from https://www.todaysparent.com/baby/baby-health/down-syndrome-baby-faq/

CBSN. (2017, August 14). “What kind of society do you want to live in?”: Inside the country where Down syndrome is disappearing. Retrieved February 10, 2020, from https://www.cbsnews.com/news/down-syndrome-iceland/

Daily Mail. (2018, December 14). ‘Deeply concerning’ figures show a 50% rise in the number of Down’s syndrome abortions over the last decade as campaigners blame prenatal test set to be used by the NHS. Retrieved February 10, 2020, from https://www.dailymail.co.uk/health/article-6496763/Deeply-concerning-figures-50-rise-number-Downs-syndrome-abortions.html