How an Increasing Population Leads to Worsening Hygiene in Slums 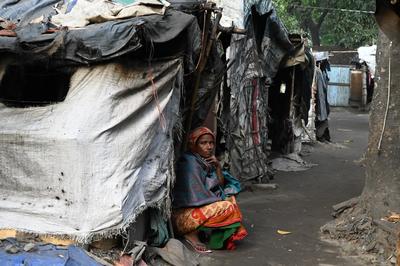 An article by Dominic Kirui appeared on Global Health NOW on March 23, 2022 that highlights how villages and slums are suffering due to the rise in population. Kirui focuses on Kibera, the largest slum in Africa, and specifically Laini Saba, a village within Kibera. Mary Ndira, who lives with her family in Kibera slums, tells Kirui of the challenges that she has to go through. For one, she has an 18-month-son, Cosmas, who suffers from dysentry. He looks weak, having battled the disease multiple times of his life.

Kibera slums, which is a 2 square-kilometer shantytown, is home to more than 250,000 people. Ndira and her family live like others in mud walled and corrugated metal houses that are packed closely together. Ndira has lived in Kibera since 2010, having moved in with her brother. Five years later, she got married and moved to Laini Saba from Laini Nane, which is another village in Kibera. In many ways, she resembles what the average family living in Kibera is like. She has a father who works in the city and a mother who works as a farmer in Machakos County, which was her original home and is now a dry area due to the effects of climate change. Ndira says that her mother used to practice farming on a larger scale, but that all changed when the rain patterns became uncertain in 2018, and it has become impossible to predict when it will rain. Now, her mother is only able to farm for family consumption (Source:Global Health NOW).

Climate change’s effects have robbed many Kenyans of a major livelihood that they could have depended on a few years ago; however, agricultural production has now been greatly reduced. When people are unable to have jobs in farms, they move to urban areas in search of other job opportunities. Since many cannot afford to live in middle and upper class neighborhoods, they often end up living in slums. A report by the World Bank published in January 5, 2022 estimates that by 2050, more than 38.5 million people in Kenya, Uganda, Rwanda, Tanzania, and Burundi could be forced to move due to climate-related factors.in fact, the percentage of Kenyans living in urban areas has already risen from 23.6% to 28% between the years 2010 and 2020, according to the World Bank. The World Bank also estimates that Kenya’s population will double by 2045, which will result in half of the country’s population living in urban areas by 2033. Around 250,000 people move into cities in Kenya annually, with that number expected to increase with a growing population. Such an increase in population will undoubtedly lead to the straining of already scarce social and economic services (Source:Global Health NOW).

“Kibera, like other slums, lacks basic infrastructure including water, sanitation and hygiene services, housing, employment, and access to food and nutrition,” says Martin Muchangi, program director for Water, Sanitation and Hygiene, Neglected Tropical Diseases and Public Health Emergencies at Amref Health Africa in Kenya. “The resulting communicable and noncommunicable diseases afflict populations in slum areas,” he said, “The reality is you find that diseases such as diarrhea, dysentery and typhoid are more predominant in that area as opposed to other suburbs which are more developed and have social infrastructure; where people are employed, earning well and are able to eat properly" (Source:Global Health NOW).

An example showcasing Muchangi’s concerns lies in the data provided by a community health worker in Kibera’s Laini Saba village that showcases that 154 out of 896 children under 5 living in the village were diagnosed with diarrhea, and 5 had dysentery. To many of us, those might seem like mere numbers, but to Ndira, her son is included in those statistics. She suspects that his illness was caused by the water in the village. “We just drink water from the taps provided by the county government,” Ndira said, “but you see, sometimes the pipes leak. And because these pipes pass through sewer lines, they mix with raw sewage and then infect us" (Source:Global Health NOW).

Although the government has attempted to provide clean water for people living in slums in Nairobi, population growth and water scarcity has led to failures in meeting everyone's needs and sanitation and hygiene gaps. Nationwide, 15% of Kenyans use unimproved water resources, such as rivers, and 41% do not have basic sanitation solutions, according to the charity Water.org, which had an article titled “Kenya’s water and sanitation crisis.” The percentages are even higher in rural areas and urban slums, since water infrastructure is nonexistent. “We know how these people are suffering drinking unsafe water,” says Repha Kuntai, a community health volunteer working in Kibera, “The county government should work closely with us to provide water treatment chemicals to the households, and also provide chlorine chemicals at water points especially the water storage tanks" (Source:Global Health NOW).

Increasing hygiene and sanitation in Kibera has proven challenging due to the population increasing daily. “If you want to know that the population in Kibera is growing, just look at how people come into the slums in the evening,” said Stephen Ochieng, Kibera Health Centre’s public health officer, “You will think that it’s a political rally. And apart from those born within the slum, most of them are moving in from the rural areas" (Source:Global Health NOW).

However, Ochieng said that his center is working with the County Government to ensure that better drains are installed and every house will get access to water treatment chemicals. “All these are efforts to better the health standards of the people of Kibera,” says Ochieng, “even though the population here is stretching our effort.” If you’re interested in reading more about efforts aimed at increasing water sanitation and hygiene, visit Water.org’s website.