The Alarming Rate of Child Abandonment in Russia 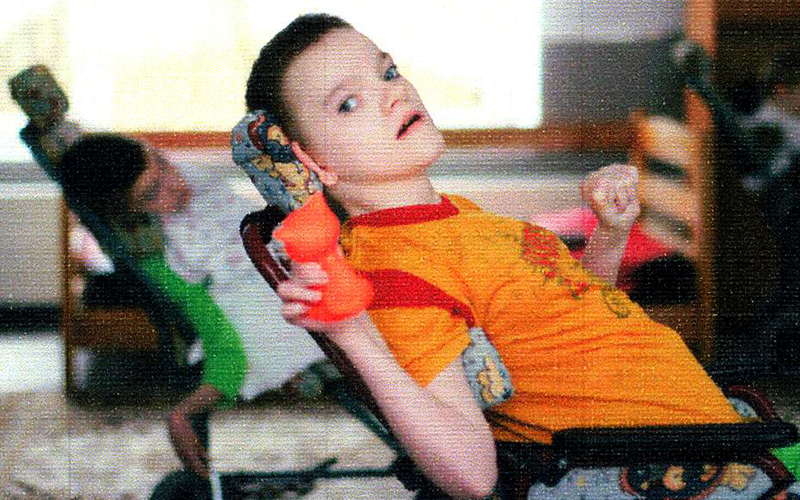 Parents of children with health complications or disabilities are often pressured into turning their children over to the state. Citing issues like the children will not be able to develop and form relationships, and that they will not live out a full life, make parents feel forced to hand their children over to these state-run orphanages. Unfortunately, the lack of education, access to healthcare, and the lack of financial means and state support further the narrative that institutionalization is the best option for these children.

Specialists have said that in many cases, the diagnoses given to newborns in the hospital are later withdrawn in the baby’s first year of life, although there has not been any exact data to support this topic. This would mean that in many hospitals of Russia, a maternity doctor may be telling a mother that her baby will never walk, talk, or be able to live independently when in fact that may not be the case.

In a 93-page report published by the Human Rights Watch, children who were interviewed from within orphanages reported substantial abuse and neglect by staff including being beaten; injected with sedatives; and sent to psychiatric facilities for days or weeks as a means of control or punishment. (Sources: Human Rights Watch; eParent.com; Sputnik News).

In addition to the abuse and neglect, disabled children in these orphanages are often given little to no access to much needed healthcare, adequate nutrition, attention, playtime, or formal education. Research has shown that such abuse and neglect has severe negative impacts on physical, cognitive, and emotional development. Additionally, the violence they experience can lead to developmental delays, disabilities, psychological damage, and increased risk of suicide and criminal activity.

Providing for these children with disabilities was made even more challenging when, in 2013, Russian President Vladimir Putin made it illegal for U.S. families to adopt Russian orphans, with or without disabilities. As a result, medical help became unattainable to those who needed it, further burdening Russia’s already lacking system.

In recent years, the Russian government has taken steps to address the high institutionalization rates among children with disabilities, including enacting the National Action Strategy of the Rights of Children for 2012-2017 which promises to prevent abandonment of children to institutions, and to reduce institutional care. However, Human Rights Watch found that this, among other policies, lack proper plans for implementing and monitoring their actions. (Source: eParent.com).

The key to protecting these children is to ensure that they are not forgotten by the world, especially at a time when they have already been forgotten by their own government. Orphanage staff members have expressed the desire to help but lack the resources and educational tools to properly care for the children. The world is watching, and the world can help.

For more than eight years now, the World Forgotten Children Foundation (WFCF) has supported various organizations in Russia, specifically organizations such as Diema’s Dream Foundation, ensuring that children with disabilities receive critical items and care such as mobility equipment, orthopedic and physical therapy, and life skills and social adaptation support.

It is the hope of WFCF to increase awareness regarding the orphan crisis and the conditions of children living with disabilities in Russia, as well as ways that the global community can come together to support these children.

More Blog Posts
How to Reverse the Impacts of COVID on Children
Children in low-income countries are 16 times more likely to die from a common form of eye cancer, study finds
Only Half the Story: How Stigma and Discrimination Shape the Lives of Children with Disabilities
Disease Spotlight: Hansen’s Disease/ Leprosy
Medical Guidelines Finally Address Care for People with Down Syndrome
Tanzanian Children with Disabilities Trafficked and Enslaved in Kenya: A Heartbreaking Investigation
Pregnancy Is a Major Risk in Sierra Leone
Helping Organizations Assisting Women’s Education
COVID Vaccines Provide Hope For HIV-Ravaged Countries
An Effort to Improve Global Health
Infertility as a Neglected Disease Affecting Impoverished Countries
Disease Spotlight: Trachoma
How an Increasing Population Leads to Worsening Hygiene in Slums
Almost one billion children and adults with disabilities and elders that need assistive technology lack access, new report finds
Sudden Infant Death Syndrome Still Plagues Many
MMWR Spotlight: West Nile Virus and Other Domestic Nationally Notifiable Arboviral Diseases— United States, 2020
Sisters of Mokama and How They Changed India’s Health
Monkeypox: The Impact on Middle- and Low- Income Countries
Global Accessibility Awareness Day
Chronic Non-Communicable Diseases Are Increasingly Affecting Impoverished Communities
Global COVID-19 Vaccination Efforts Are Losing Steam
Disease Spotlight: Typhoid Fever
MMWR Spotlight: Surveillance to Track Progress Toward Polio Eradication— Worldwide, 2020-2021
Children With Disabilities Left Behind As War In Ukraine Rages On
WFCF Celebrates Earth Day
Breaking the Cycle of Poverty: A Community-Based Approach
Disease Spotlight: Chagas Disease
WFCF Sends Funds to COVAX for Equitable Vaccine Distribution
MMWR Spotlight: Progress Toward Achieving and Sustaining Maternal and Neonatal Tetanus Elimination- Worldwide, 2000-2020
Tackling the “Brazen Trade” of Child Trafficking in Africa
The Impact of Adolescent Pregnancy on Communities Globally
Extra Chromosome = Extraordinary
Ukraine Aid
Addressing Ways to Effectively Rehabilitate and Provide Care for Children Refugees
Combatting the Climate Crisis and Supporting Communities in Need
Make a Donation From the Heart
United Nations Sustainable Development Goals
Why Is the Mission of World Forgotten Children Foundation Important?
New Year, New Initiatives
Donors. Our Most Valued Asset.
What’s New at WFCF
Join WFCF in Supporting Those in Need – No Contribution is Too Big or Too Small
Creating a Safer Environment for Babies and Mothers at the Baby Box Center
COVID-19 Vaccines, Variants, and the Long Road Ahead
Creating Water Accessibility Through Solar Power
World Hepatitis Day 2021 - Raising Awareness and Influencing Change
COVID-19 Vaccine Distribution: A Global Logistics Nightmare
WFCF Funds Mobility Equipment for Children Living in China’s Hunan Province
Giving Back on GivingTuesday – A Global Generosity Movement
Interview With David Gotts, Founder of International China Concern
Commemorating Humanitarian Workers for More Than a Decade
The Latest Facility Repairs at the “Baby Box” Church
Combatting One of the Greatest Global Health Challenges and All Its Various Form
Interview With Garry Brooks aka “Mr. Garry”, Founder of African Community Project
How Fighting to End Poverty Can Minimize COVID-19 Casualties
The Unspoken Negative Impacts of COVID-19 on Non-Profit Organizations Worldwide
Sorry, Not Sorry – Embracing Down Syndrome Globally
Raising Awareness on World Birth Defects Day
WFCF Seeks New Projects Under Expanded Mission
WFCF Aims to Combat Poverty Through Expanded Mission
WFCF Funds Latest Construction Project at the Baby Box Church
World Cerebral Palsy Day: Building a Community of Awareness and Support
Paper Bridges: Spreading Hope to Orphans One Letter at a Time
The Effects of Early Neglect: Addressing the Emotional Needs of Abandoned Children
Disability Awareness Day
National Cleft and Craniofacial Awareness and Prevention Month
Luke McAuley: The Wheelchair Maker
International Albinism Awareness Day
Understanding Spina Bifida and Its Impact on Children in Developing Countries
The Bamboo Project: How It is Changing Lives
A Child’s Right to Mobility: The Importance of Wheelchairs in Developing Countries
Adoption and Special Needs Children: The Numbers, Heart, and Preparation Involved
Stopping the Stigma Together: Fighting for the Rights of People with Disabilities
A Stairway to Hope
WFCF is Currently Seeking New Funding Projects
WFCF Supporting Inclusivity for Students with Disabilities in Africa
Addressing the Issue of Accessibility and Mobility in Developing Countries
When Abandoning Your Child Is a More Loving Option Than Keeping Them
An Unforgettable Month of Giving
Child Mortality in Sub-Saharan Africa
Spreading Awareness About POTS: The Life Altering Illness Impacting Kids, Adolescents, and Adults
The Alarming Rate of Child Abandonment in Russia
Sunshine, Smiles, and a Shared Mission
No Child Should Have to Struggle to Fall Asleep
WFCF Expands Reach Across the World Wide Web
War-Torn Countries and the Rising Orphan Crisis
Equipment That Makes a Difference
Looking Back, Looking Ahead: 15 Years of Supporting the Forgotten Children
WFCF ‘Restores Integrity’ to Children of Zambia
The Power of Play
Why Don’t We Say “Thank You” More Often?
Reflections on the Meaning of Life
We Can Light up Darkness!
Developmental Disabilities in Children Across Different Cultures
Achieving World Peace
The Mission of the World Forgotten Children Foundation (WFCF)
The Life and Hope They Deserve
Why Is the Sky Blue?
A Simple Act of Kindness
The Great Divide: Technological Growth and the Increasing Gap between Rich and Poor Nations
We Are All One
Why Do I Serve on the Board of WFCF?
Global Economic Uncertainty and Plight of Less Fortunate
Visions of Change
On Making a Difference
Plight of Handicapped Children
One Brick at a Time
What Really Matters Is Helping Others Win
Why Do It?
Axis of Goodness
Message from the President of WFCF
The Tax and Other Benefits of Charitable Gifts
Message from the President of WFCF
HIV/AIDS in Africa
Message from the President of WFCF
WFCF is Currently Raising Funds for These Critical Needs