In 2018, the World Forgotten Children Foundation (WFCF) funded US$ 5,731 to the Imani Project in Kenya. The funds went toward the purchase of custom wheelchairs and other apparatus for children with severe cognitive and physical disabilities living in the remote coastal villages of Kenya.

The Imani Project is based in Portland, Oregon and was founded by Marlene Anderson. It serves as a partnership between Americans and Africans, dedicated to acting against HIV/AIDS and improving health conditions in rural Kenya.

Children in rural Kenya who are suffering from motor limitations are often shut-ins, stuck in chairs or beds in dark environments with no electricity. With wheelchairs the children can go places and take advantage of a social life in their village and enjoy the outdoors. At present, these children must be carried or carted, which adds physical stresses to their caretakers. Having an apparatus to support their mobility and comfort is critical to their health and well-being.

After extensive research of Nairobi wheelchair makers, the Imani Project selected Luke McCauley due to his superior knowledge of pediatric customized wheelchairs.

Luke McCauley is an occupational therapist who grew up in Kenya as the child of missionaries. At a young age he knew he wanted to become a medical missionary which led him to pursue occupational therapy (OT) as a career, with the hopes of ultimately using it to minister kids with disabilities in less developed countries.

Luke McAuley fitted the children with their wheelchairs, customizing them as needed with the proper measurements, seatbelts, and side supports. If a child was too small for a wheelchair or in need of a different apparatus, Luke identified another option for them that suited their needs.

Twelve children were provided with customized apparatus to support their mobility: 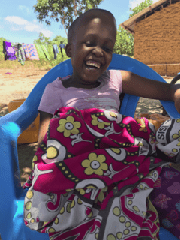 Doris is an orphan who lives in Mnazimoja village with her grandmother and four siblings. Doris has hydrocephalus and is unable to speak or move by herself. Her right arm is paralyzed, and permanently clenched in a hook position. She has both cognitive and physical disabilities. Doris was very excited about her wheelchair. She smiled and laughed often as the wheelchair was fitted to her exact measurements and needs, which included a seatbelt and side support. In addition to providing the necessary apparatus for Doris, Luke also informed the Imani Project of a clinic for Hydrocephalic children being held in December and every effort was being made to take Doris to this clinic. 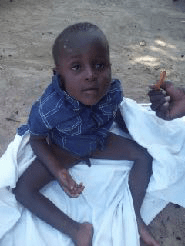 Elvis lives in the village of Musifini and has hydrocephalus and is cognitively and physically impaired. He is not able to walk or talk and suffers from severe malnutrition. Elvis required a seat belt and stabilizing foot board. His mother was thrilled with the wheelchair as Elvis requires 24-hour care, and prior to receiving the wheelchair, she was carrying him everywhere with her. 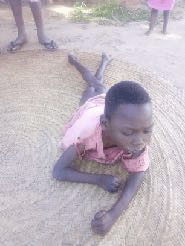 Peter lives in Masheheni village and has cognitive and physical disabilities, which includes severe motor limitations. He can move by crawling but cannot stand and his head is not supported by his neck. Because he is always crawling around, he gets skin rashes and infections easily. He sleeps most of the time and suffers from extreme malnutrition. His wheelchair required a seat belt and side accommodations. 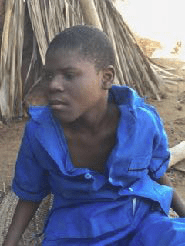 James is a HIV/AIDS orphan living in Masheheni village with his elderly grandmother. James has severe cognitive and physical disabilities and requires constant supervision as he cannot move on his own or feed himself. He cannot walk and sits with his legs crossed. James now has a wheelchair as well as his own bed with a mosquito net. James required a seatbelt for his chair. He seemed to notice that he was “up” and could look around. 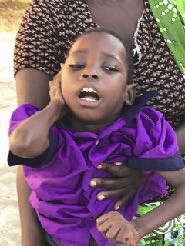 Robert lives in Sabaki village and has cognitive and physical disabilities which cause him to not be able to walk or sit by himself. His mother works grazing someone else’s goats, and while she works, Robert is often locked inside the mud house. He had never been seen by a doctor before and is severely malnourished. While being fitted for his wheelchair, Robert seemed to have trouble breathing, and Luke suggested he be looked at to see if the trouble was inflamed tonsils or adenoids. For his wheelchair, Robert required head and neck support, a chest harness and seatbelt. He seemed to be happy in his wheelchair and smiled repeatedly. 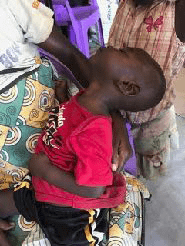 John lives in Kapapuni village and has cognitive and physical disabilities which cause him to not be able to hear, see, talk, walk or raise his head. He sleeps most of the time and is totally dependent on others to meet his daily needs. He had never been seen by a doctor before. For his wheelchair, John required both head and neck supports, a chest harness, seat belt, and foot supports. 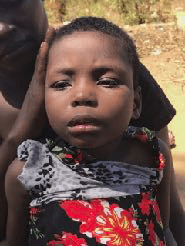 Helen lives with her mother and four siblings in Marikebuni village. She is extremely malnourished and has cognitive and physical disabilities causing her to not be able to talk or feed herself. She also cannot move by herself and she has no control over her neck muscles (her head falls back). For her wheelchair, Helen required head and neck support in addition to a chest harness and seat belt. Helen was able to look around once in her wheelchair, with her head and neck upright and supported. 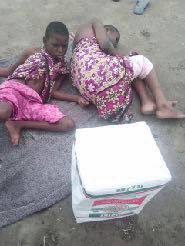 Neema and Miriam are sisters living together with their mother in the village of Lwandani.

Neema has cognitive and physical disabilities, and her motor limitations are so severe that she can only lay on the floor. Prior to having a wheelchair, in order to move Neema, she had to be put on a blanket and then pulled as she was too heavy for her mother to lift. Neema has Petit Mal seizures constantly and needs medical consultation so that she can be medicated for the seizures. For her wheelchair, Neema required head and neck supports, as well as a chest harness, seat belt, and leg restraints.

Miriam sleeps most of the time and like her sister, needs a medical consultation to receive medication for seizures. For her wheelchair, Miriam required head support, leg restraints, a chest harness, and a seatbelt.

Often, Neema and Miriam were locked in their small mud house with no windows so their mother could beg for food or work if it was available.

The African Imani Project Director, Francis Kahindi, was so concerned about the Ali sisters that he enlisted the help of two village elders to make sure the girls go outside at least twice a day. The family is extremely poor, and the girls are severely malnourished. 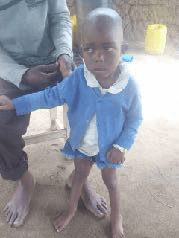 Phillip lives in the village of Masheheni. He has a heart condition and is not growing normally. Luke suggested that perhaps Philip could benefit from physical therapy. When Philip came to the Imani Project office, he was walking. Luke suggested that a wheelchair was not needed, but rather sandals with arch supports. At the clinic in Mombasa, Luke helped to have Philip fitted with custom sandals with arch supports. 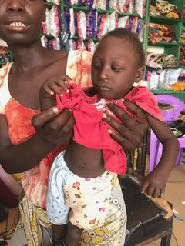 Dennis lives with both of his parents in Mnazimoja village. He has cognitive and physical disabilities and is the size of a 6-month old infant, and not growing. He may have a form of dwarfism as well as microcephaly. When Luke met him, he felt that Dennis was malnourished and needed more protein and suggested a food called Plumpy’Nut®, a Ready-to-Use Therapeutic Food (RUTF) specifically formulated for the nutritional rehabilitation of children from six months of age and adults suffering from severe acute malnutrition. He suggested a speech assessment, as well as a physical examination to determine if Dennis does have dwarfism and microcephaly. Dennis went to Mombasa and was assessed. Because of Dennis’s size, he is too small for a wheelchair, so Luke built a special chair for him. He seemed to like being upright in the chair, rather than crawling. There may be some exercises that would be helpful for Dennis as well. The Imani Project is going to seek the services of a physical therapist to provide care for him.

Everlynn lives in Sabaki village. Her father is her caregiver and is very invested in helping his daughter. Both of Everlynn’s hands and feet are clubbed and due to her limited mobility, she has never been able to go to school despite her potentially normal intellect. Everlynn went to Mombasa to be fitted for a custom pediatric wheelchair and was assessed by a physical therapist. Now with her wheelchair, she will likely be able to attend school which her father is very grateful for.

“The Imani Project is extremely grateful for the funds given to us by the World Forgotten Children Foundation. With your help, we have created a miracle for these children and their caregivers.” – The Imani Project

“I would like to thank Luke McAuley for his dedication to our project, and his expertise in fitting each child with a customized pediatric wheelchair, making needed individual accommodations, as well as helpful suggestions. We are extremely grateful to Luke and his family.” - Marlene Anderson, Imani Project Founder